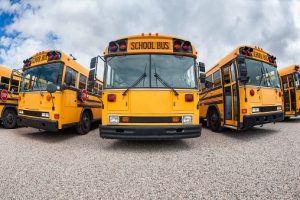 At around 7:00 AM, a school bus carrying 15 students stopped on Arkansas 32 in order to allow students to board the bus. Three students were getting into the bus when a pickup truck driven by a 25-year old struck the rear end of the bus. The owner of the pickup truck was the Little River Rural Development Authority. The truck was towing a lawn mower and a trailer behind it.

Fox 33 and other local media report the driver told authorities that he had sneezed while he was driving, which was why he failed to see the bus and rear-ended it.

Unfortunately, his alleged moment of sneezing caused one student to experience an injury to the lower body described as possibly "severe" while two other students were also hurt and necessitated medical care. Charges are pending against the driver of the pickup. As in most rear-end accidents, the driver of a vehicle which rear-ends another car (and particularly a stopped car) is usually presumed liable for causing the accident.

In most accident cases, a crash victim wishing to seek compensation has to demonstrate through the use of expert witnesses and other evidence that the driver who they're making a claim against did something negligent and was thus liable for causing a collision.

In rear-end accident cases, a presumption of negligence exists so a crash victim doesn't necessarily have to specifically prove the driver in the rear vehicle was negligent and caused the crash.  The presumption of negligence exists because it is assumed a reasonably safe driver would leave enough following distance and would pay enough attention to the cars in front of him to avoid hitting the lead car and causing a collision to occur.

In this particular Arkansas accident, the case is complicated by the fact the pickup truck was not owned by the person who was driving it but was instead owned by the man's employer. If the man who was driving the pickup was acting within the scope of his work duties when driving the truck transporting the lawn mower and trailer, the driver may not be the only one who can be held accountable for the damages caused by the rear-end crash.

It may be possible for the injured victims to pursue a claim against the driver as well as against the Little River Rural Development Authority.  If the school bus driver was found to have done anything negligent leading to the accident, the school district could also possibly be responsible for losses. However, suing government agencies and organizations can be complicated due to qualified immunity rules, so it may not be as simple as it sounds to go after a school district even when rear-end accidents happen and liability is presumed.