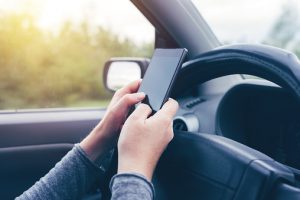 Police are planning to crack down on Jonesboro distracted driving by initiating targeted enforcement against teenagers. By state law, drivers with a learner's permit, intermediate license or restricted license are not allowed to use a cell phone in any manner behind the wheel - including hands-free devices. This applies to all drivers younger than 18. Drivers 20 and under are banned from any handheld cell phone use.

And of course, there is ample evidence revealing teens to have a real affinity for their smartphones, particularly behind the wheel.

However, a new study by Zendrive suggests these drivers aren't the ones we need to watch for when it comes to distraction. In what is being touted as the largest study of its kind, analysts at the traffic safety data firm say 88 percent of all trips involve a driver using a smartphone.

This study looked at the smartphone habits of 3.1 million anonymous drivers over the course of 570 million trips and 5.6 billion miles traveled around the country over a three-month time span, ending in February 2017. By comparison, the last time the Federal Highway Administration tackled this issue, it surveyed some 300,000 drivers in 2009.

Research here was unique because it didn't just take drivers' word for it. People have a tendency not to want to reveal bad behind-the-wheel habits, even anonymously. Sometimes they simply underestimate them. This study gleaned information directly from driver's cell phones. Analysts were able to differentiate between drivers using their phones and passengers by pinging where a person was sitting and out of which side of the vehicle they exited.

Drivers in all 50 states were ranked according to how much time drivers spent on their phones during their daily trips. Researchers then divided this amount by the trip duration. What they discovered was that not only are drivers using their phones almost every trip, they are doing so for an average of 3.5 minutes per trip for every hour they drive.

Now let's put that even further into perspective: If you look away for just two seconds while driving 55 mph, you have spanned the distance of two basketball courts essentially blind. Two seconds is all it takes to change your life - and end someone else's.

Researchers broke this data down on a state-by-state level, and rated each - 50th being the most distracted state and 1st being the least. Arkansas ranked No. 47. Four out of the top five states were in the southeastern U.S. - Mississippi, Louisiana and Alabama were also in the same "most-distracted" company. Locations that ranked worse for distraction were likely to have higher car accident rates too, which is unsurprising considering texting while driving increases one's risk of a crash by 20-fold.

Although the exact reasons weren't clear, researchers did say that state-level bans on handheld cell phone use did appear to have some impact on distracted driving, as six of the 10 least-distracted states had such laws.

Arkansas law restricting hand-held cell phones affects only notice drivers and school bus drivers. Although there is a ban on text messaging for all drivers, licensed adult motorists are still free to use their handheld smartphones while driving. The only exception is when traveling through school zones or highway construction zones, in which case all drivers are prohibited from using handheld devices. That law is enforced secondarily though, meaning if a law enforcement officer observes a violation, he or she cannot initiate a traffic stop on that basis alone. Some other infraction would need to be observed first.