When Cars Crash Into Jonesboro Buildings 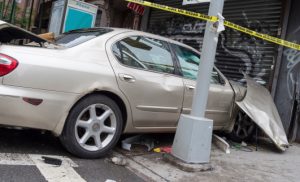 Any car crash can cause significant property damage, but crashing into a building increases the costs substantially. Worse, both the number of people injured and severity of injuries can be exacerbated by a car accident that involves a building. Recent car crashes into Jonesboro buildings have caused significant harm to our neighbors and property.

On Southwest Drive, one Jonesboro homeowner was enjoying the news with her dogs when a car suddenly crashed through the front of her house. KAIT 8 reports that the driver, just 19 years old, had been huffing some sort of intoxicant while driving. She inexplicably crossed three lanes of traffic before crossing the yard and colliding with the home. Luckily no one was injured in this accident. The homeowner was able to safely evacuate her dogs, as well.

Another Jonesboro accident was less preventable. According to WECT, a driver having a heart attack crashed into the Kum and Go gas station on Red Wolf Boulevard. It is believed that the driver was attempting to pull into the gas station parking lot. Instead, he lost consciousness and crashed into the building. This case illustrates the danger of medical conditions that can interfere with a person’s ability to safely drive.

Diabetes, seizures, narcolepsy, and other such conditions can all cause a person to lose consciousness while behind the wheel. Certain conditions must be reported to the Department of Motor Vehicles (DMV) by a doctor who diagnoses them. Not all dangerous conditions are covered by this rule, however, and many drivers have undiagnosed conditions. Other conditions, such as heart attacks, strike without warning.

Why Do Building Crashes Occur?

Lohud spoke with building crash safety experts to determine the causes of cars crashing into buildings. Operator errors (such as speeding or being in the wrong gear) and pedal errors (stepping on the gas instead of the brakes) were the most common causes identified, and accounted for 30 and 26 percent of the accidents which had been studied. Other common causes included drunk driving (17 percent of accidents), traffic accidents (11 percent) and medical emergencies (8 percent). Seven percent of these accidents were determined to be part of a "ram raid," in which the driver intentionally crashes into a building in order to gain access and commit theft.

Driver age may also play a role in car crashes involving buildings. Some 44 percent of accidents reviewed involved drivers who were aged 60 or older. This is disproportionate to the overall number of licensed drivers in the same age range (just 19 percent of all licensed drivers). This and other similar research findings emphasize the importance of helping older drivers to maintain their skills and knowledge for driving tasks. Family members should also open the discussion about safe driving in older age, and what warning signs might raise questions about driver safety. This discussion might be uncomfortable, but it can save lives.

Our Jonesboro car accident attorneys have seen drivers, passengers, pedestrians, and building occupants injured by negligent drivers. Building accidents can be highly dangerous and costly. With a combination of building infrastructure, driver safety awareness campaigns, and better screening for medical conditions that make it unsafe to drive, the number of car crashes into buildings can be reduced.