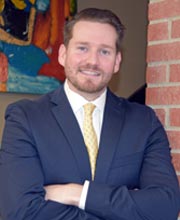 The Lake City native graduated from Buffalo Island Central High School in Monette in 2007.  In 2012, he earned a Bachelor of Arts in Economics and a Bachelor of Science in Journalism from Arkansas State University.

He received a Juris Doctor from the University of Arkansas School of Law in Fayetteville in 2015.  While at UofA, Phillips served as the secretary of the Board of Advocates, responsible for planning and organizing mock trial and moot court events, a member of the Washington County Inns of Court, and also studied abroad at Downing College at the University of Cambridge in England. In addition, he was the UofA Law School trial competition champion in 2014, as well as the UofA’s representative in the national trial competition in 2014 and 2015.

Learn more about how attorney Phillips can help you. Contact us.

If you’ve been hurt in an accident due to someone else’s reckless or negligent behavior, learn more about how attorney Phillips and our law firm can help you. Contact us and schedule a free consultation today at our Jonesboro office. Call 870-336-4747 right now. Our law firm proudly serves clients throughout Arkansas, Southeast Missouri, and Memphis, Tennessee.